Hundreds of Venezuelan migrants knelt in front of Ecuadorian Police officials to allow them to enter the country, given the visa requirement that began in effect on Monday at midnight.

With the head on the asphalt and the hands protecting the forehead, the migrants sang slogans asking the uniforms to allow entry.

The officers with the riot police did not change before the heartbreaking scene.

On Monday afternoon Venezuelans prevented traffic at the border crossing of Rumichaca, border of Ecuador and Colombia, due to visa requirements. 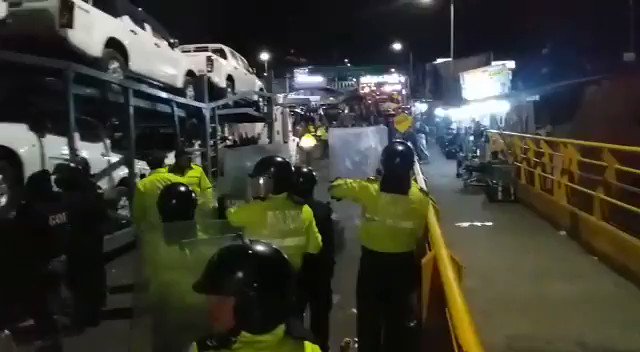 After six hours they opened the way
The migrants, some elderly, with children in their arms and without eating, unlocked the road and enabled the movement, Ecuadorian Police reported.

«We inform you that the vehicular traffic is enabled on the international bridge of Rumichaca, Carchi,» the National Police of Ecuador reported through Twitter, without offering more details.

Several young people and families were placed in front of the vehicles that tried to enter Colombian soil to call attention to their situation and helplessness in the face of the new measure arranged by Ecuador.

The measure came into effect last midnight and since then, the entry of emigrants from Venezuela to the country has been reduced to a minimum, in contrast to the 13,110 that made it this weekend, according to the Ecuadorian Government Ministry, said the international news agency, EFE.

With tents and their travel gear that they placed in front of the vehicles, protesters reminded the Ecuadorian Police that they were blocking their way, how their country gave refuge to thousands of Ecuadorians who escaped the economic crisis 20 years ago, while they were waiting to open borders to each other.

Criminal Forum: repression is the weapon that Maduro’s regime has left

Duque will sign an agreement that will benefit Venezuelans with job...